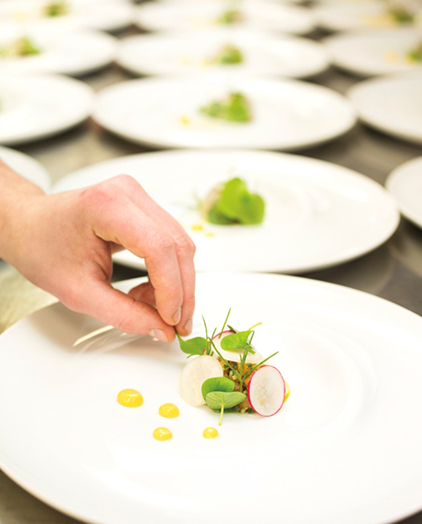 If you don’t have purslane or sweet cicely at your disposal, use mixed salad leaves

Blend the lemon verbena leaves in a food blender with the sugar and salt to form the base for curing the trout. Place the clean, de-boned trout onto a liberal base of the marinade and dust on top to allow the lemon verbena to work its magic. Leave this sweet salt on the trout for a good hour before washing it off and cutting the trout neatly into small dice.

For the kitchen garden herb oil, blanch vibrant green leaves in boiling water, refresh under a cold tap and squeeze dry. Now blend with the olive oil and strain through a muslin cloth. Pour this into a squeezy bottle ready to plate the dish.

Peel and dice the turnip or mooli the same size as the trout. Bring the vinegar, light brown sugar and three lemon verbena leaves to the boil. Pour in the diced turnip and remove from the heat straight away. Allow to cool and cook at the side of the stove. Drain and mix the pickled turnips with the lemon verbena cured trout and season. Mix the duck egg yolk in the thermo mixer for 15 mins at 65°C until thick and cooked, without scrambling! An alternative to the duck egg yolk is to mix mayonnaise and turmeric together and add some chopped herb leaves for colour.

Use the Yuzu puree as a base. Pile a neat tower of the trout dice with the pickled turnip or mooli  on top. Arrange 5 discs of pear and 5 of thinly sliced radish around this and the asparagus tips. Press the other herbs gently on top and  in between the discs carefully. Cut out the nasturtium leaves. Finish by pouring a little kitchen garden herb oil over the trout and dot some of the duck egg yolk/mayonnaise sauce around the plate. This richness contrasts well with the sharp citrus yuzu flavour. 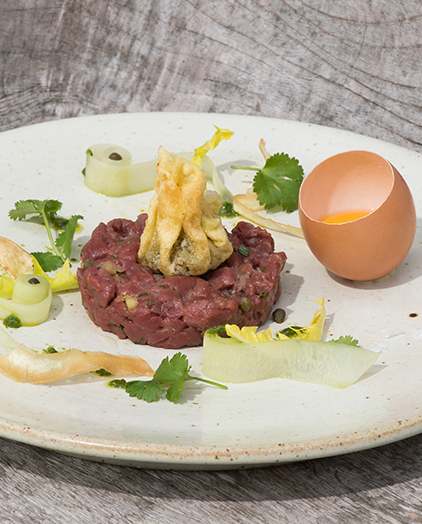 12 wonton wrappers (1 packet usually contains 100 wrappers, so separate into batches,  wrap well in clingfilm and freeze for a later date)

To create the wontons, slow cook the venison shoulder with onion, carrot, red wine, beef stock and herbs for 2 hours. Shred the venison and cook the sauce down then add the hoisin sauce. Egg wash the wanton wrappers and wrap the venison before deep frying the wontons.

To make the tartar, dice the venison neatly into tiny cubes and remove all sinew. Mix in all the remaining ingredients then shape the mixture into 4 cylinders. Add the brandy and all those ingredients.

For the yuzu dressing, mix the yuzu, honey and mustard together, then pour on the rapeseed oil, slowly whisking all the time. Add a pinch of salt and pepper to season and place in a squeezy bottle to serve.

For the dandelion and burdock salad, we are using the yellow dandelion shoots that look great and taste better! Burdock it is a very long thin stick-like root. Simply remove outer skin, peel into long strips and allow to dry in a warm place (Aga warming oven or in a low oven or microwave briefly just to dry out the moisture). Gently fry the burdock strips until golden in a shallow pan of oil taking care not to get the oil too hot.

Once crispy and golden (takes about 10-20 seconds) place on a draining paper and lightly season with salt.

Place a cylinder of tartar in the centre of the plate with the wontons on top – we have allowed three per person. Separate the egg and place the egg yolk in the eggshell at the side of the tartar. Place crispy burdock root and dandelion yellow leaves with pea shoots and radish tops onto the plate and drizzle the yuzu dressing. Sprinkle with Maldon sea salt and coriander leaves. 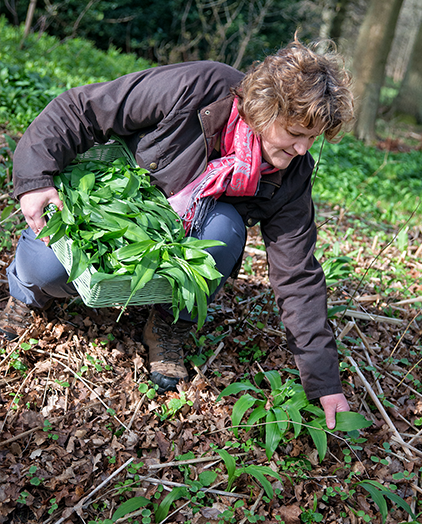 1 bunch of fresh asparagus, stem bases snapped off and trimmed at the base

juice of half a lemon (approximately)

An ideal dish to showcase two fantastic products that grow at the same time of year. You’ll need to forage for wild garlic and ideally get locally grown stunning asparagus spears.

The hollandaise can be tricky to make, but will grace any asparagus served at your table.

Prepare the asparagus spears and boiling hot water ready for steaming. Steam the asparagus for 2 minutes until cooked and tender.

Place the egg yolk mixture in a glass bowl over a Bain Marie (simmering water bath). In a separate pan, melt the butter and remove any residue from the top. Whisking all the time, slowly add the butter onto the mix until it is all incorporated – leaving the milky butter in the pan. Add the freshly squeezed lemon juice and a sprinkle of salt and cayenne pepper.

Finally add the garlic leaves mixed with a knob of butter to the hot hollandaise and it will wilt gently. Mix well.

Divide the asparagus between two plates, simply pour the hollandaise over the steamed asparagus and enjoy. 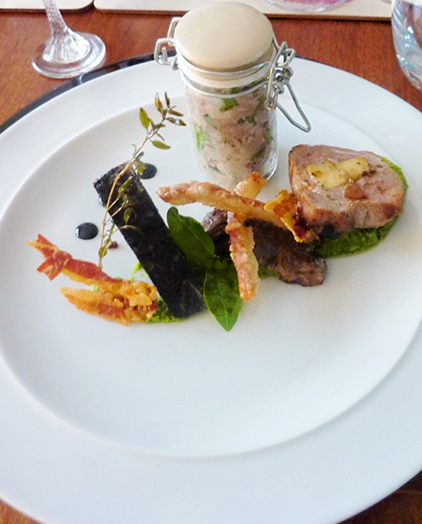 First, place the cider and belly pork into a deep tray, cover with tinfoil and slow cook at 170°C for 2 hours. When soft, remove the belly pork to a flat dish and reduce the cider to make a thick glaze to use for serving later. Press the belly pork with a tray and weight on top and leave for a couple of hours in a fridge. Cut into 4 squares when cold.

Simmer the pork cheeks in a pan with the carrot, onion, leek, bay leaves and apple juice for 2½ to 3 hours until soft. Once the pork cheeks are soft, remove them and allow to cool, before shredding them into strands. Then place in a large bowl with the shallots, capers, gherkins and chopped parsley, and add a pinch of salt and pepper to season. Mix well. Roll the pork cheek mix into a cling film sausage shape (this is also great to slice up and use in a sandwich).

For the potted brawn, slice up the pork cheek mix and pot into 4 small Kilner jars. Add 2 teaspoons of pork fat from the crackling tray and a teaspoon of butter to set on top of the fat in the jars. Place in the fridge to set.

Cook both sides of the black pudding under the grill, for about 5 minutes. Slice into a triangle shape, one piece for each plate

Stuff the prunes and apricots into the pork fillet and season with salt and pepper.
Pan fry with olive oil and then finish in the oven at 180°C for 12 minutes. After 10 minutes add the squares of belly pork and the black pudding triangles so they heat up.

To make the crackling, cut deep scores into the pig skin, rub well with salt and bake in an oven at 180°C for 10 minutes until golden and crispy. Break into thin slices ready to serve.

At the same time as cooking the crackling, place the 4 slices of pancetta between 2 flat baking trays (keeps the bacon perfectly straight) and put into the preheated oven at 180°C for 10mins.

Blanch the garden peas and blend them once they are cooked to make a puree. Stir the butter into the puree.

Place the hot pea puree on the plate. Slice the pork fillet and place a slice on each plate, propping up some crackling and pancetta alongside. Then add the square of pork belly and a swirl of the reduced cider jus. Place the potted jar of brawn on the side of the plate with a teaspoon to serve. Finish by adding the black pudding triangles and scattering some pea shoots to garnish.