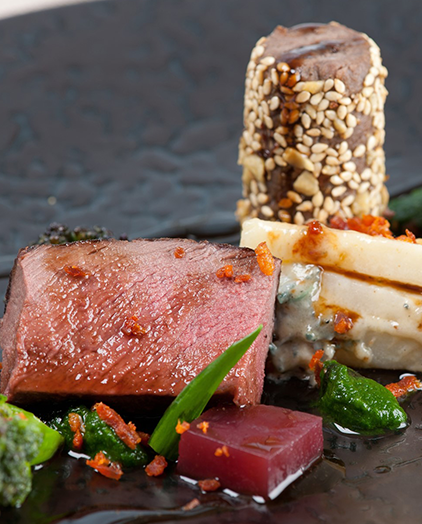 2 shots Damson gin (this will need to have been made in advance and well marinated – why not use our Sloe Gin recipe?)
¼ pint cranberry juice
4 leaves of gelatine

Today I am using Roe Deer Venison from Yorkshire Game

Seal the venison in a hot pan, add the red wine, mugwort stems, herbs and vegetables and cover with a tight-fitting lid. Braise slowly for at least 1½ hours at 160℃ until tender and thoroughly cooked.

Allow to cool and then flake gently and place in a kitchen aid. Using a paddle beater, mix until the fibres of the meat are broken down but still have their texture. Add 200ml of much reduced venison jus and chopped fresh herbs.

Roll the venison in cling film and set in a sausage-style roll, tied at either end. Place in the fridge to chill and once set, slice into portions and roll in the Dukkah rub.

Pan fry the rolled Dukkah venison cylinder and re-heat in the oven for service.

Strain the liquor you cooked the venison in for the sauce and reduce this down to a sticky paste season and add cold cubed butter to give the sauce a shine.

Marinade the mugwort leaves in the liquorice, rub over the venison and then vac pac each piece of venison in the marinade and cook at 63℃ in a water bath. Alternatively, marinade overnight and pan fry the venison to seal on all sides before putting in a preheated oven at 180℃ for 8-12 minutes until cooked. Allow to rest well.

Reheat the venison in foaming butter by gently heating a knob of butter until it starts bubbling, but not burning. Slice, trim then carve in half and serve. Remember to carve the loin running with the grain of meat rather than against the grain.

Gently bring the cream to the boil with the crushed garlic and thyme leaves.

In a butter greased dish, layer the potatoes slices with the cream and thyme and crumble the Yorkshire Blue cheese between the layers of potato, leaving some for the top and cook at 180℃ for 30-40 mins until cooked.

Allow to cool slightly and then remove sliced portions from the dish and neatly trim before plating up.

Line a plastic container with greaseproof paper and pour in the jelly mixture so it’s about 1cm deep. Cover the container and place in a fridge to set.

When ready to serve, turn it out and cut into small cubes.

Plunge the spinach into a dish of boiling water, then refresh under a cold tap and puree in a blender with some melted butter or Yorkshire rapeseed oil and season with salt and a little nutmeg. Reheat to serve.

Cut the broccoli into small florets and blanch for a few minutes in boiling water, then run under a cold tap. Reheat before serving.

Place a slice of potatoes in the centre of the plate and position the venison Dukkah cylinder upright on the line of food. Serve the venison with a sticky jus reduced from the liquor used to cook the shoulder of venison. Garnish with wild garlic shoots and squares of damson gin jelly. Add small florets of broccoli and finish with another drizzle of sticky jus. 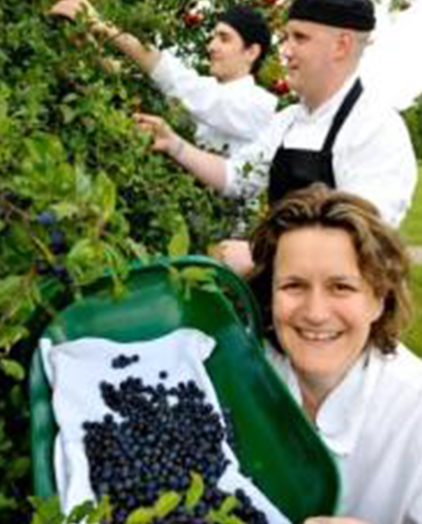 First pick your sloes when ripe and turning black. Give them a wash and pat dry with a clean tea towel.

There are two different methods you can follow when making your sloe gin. The first option is to prick each sloe berry several times with a pin (good luck with that!). A more preferable option is to freeze the sloes (this should take 6 hours or so) and once hard you can leave them to defrost. As the berries defrost, the skin will break itself which will save you hours trying to prick them all!

Next, divide the sloes between two demijohns or large bottles. Sprinkle equal amounts of sugar over the sloes in each bottle and add a clove.

Store your gin and berries in the bottles for 3-4 months and then strain out the sloes and the cloves, leaving the gin a light purple colour.

The longer you leave the gin in the bottle the darker the gin will become, and the richer the flavour. 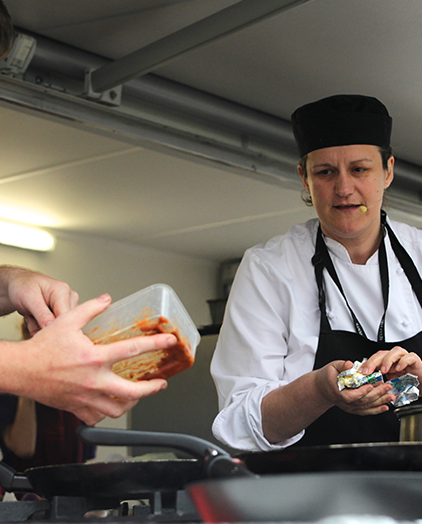 For the stock, place all the ingredients together in a deep pan and cover with cold water, then bring to the boil. Simmer for 45 mins to extract the flavour from the carcass. Skim any grease or fat that rises to the top.

To make the broth, place the pearl barley in approx. 1 litre of cold water and boil until soft. Add a bay leaf and a pinch of salt. Rinse in a sieve under a warm tap until all the stickiness is removed.

Fry the bacon, onion, carrot, celery, and parsnips in some vegetable oil with the bay leaves and chopped herbs then add the stock and simmer until the vegetables are almost cooked. This will take approximately 10 minutes.

Place them to one side until you serve your broth.

Once the broth is hot and the turkey, bacon, pearl barley, vegetables and gin are all mixed together, ladle the broth into 4 warm soup bowls.

Float the cheese croutes on the top and serve with some crusty bread. 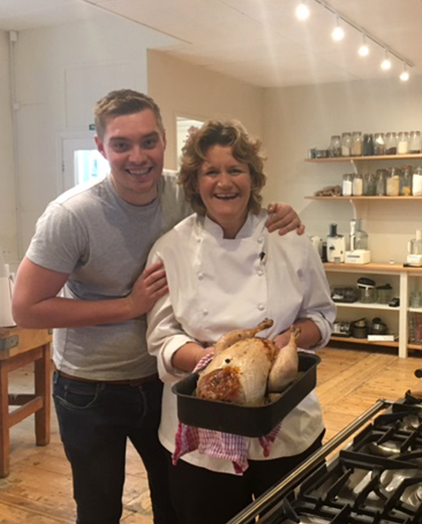 salt and pepper to season

Three options to excite the family with stuffing for the turkey – simply substitute your choice of fruit and nuts in the recipe below, depending on which option you prefer:

Sweat the onion and garlic cloves in a pan, then remove from the heat and allow to cool.

Add the onions and garlic to the pork sausagemeat, together with the chopped fruit, chopped nuts (or toasted pine nuts), chopped bacon, egg and breadcrumbs.

Mix it all together and add the seasoning.  Add a splash of brandy for a traditional turkey stuffing with a twist.

Stuff the turkey and then place it in the fridge until you are ready to put the bird in the oven! 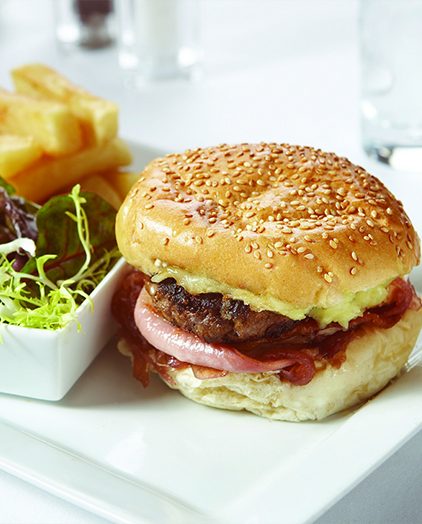 salt and pepper to taste

A nice easy way to get on with game is to make burgers – the kids will love them and the ‘olds’ won’t be scared off either!

Remove the skin from the pheasant and the legs and breast from the carcass.  Blend the breast meat in a food processor for a few seconds until it is just broken up, but before it becomes like puree.

Remove the thigh meat and blend again.  The drumstick of a pheasant is full of fibres and bony bits, so I would recommend just making a game stock out of these instead!

Place all the ingredients in a bowl and mix well. Form into burger patties.

Chill in the fridge for 20 mins and then pan fry for 2-3 minutes on each side.

Check they are cooked through and serve with a sesame seeded burger bun, some crisp salad leaves, a generous blob of mayonnaise and if you really want to push the boat out, some crispy bacon. 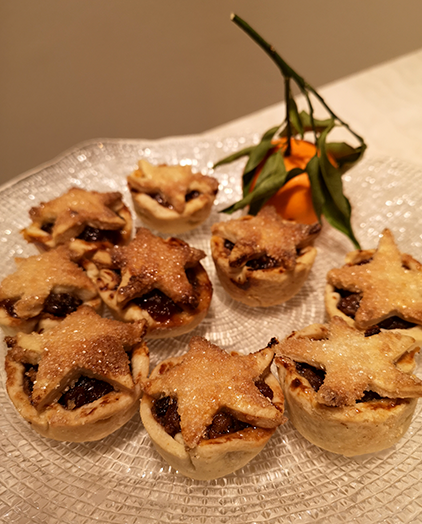 Mince pies to thrill without much effort!
Ingredients

Buy a good quality base mincemeat, then spice it up with some tangerine and lemon zest and a splash of brandy. If you want to add an extra kick, some homemade brandy cherries are also good chopped in, just remember to remove the stones! If you do not have any brandy cherries, ‘griottines’ are a good substitute – these are cherries marinated in Kirsch liquor and are available from good delis.

These bitesize mince pies are full of flavour.

Make your mince pies before the Christmas festivities begin and freeze them so you can just warm them up when you need them.  This way you and the family will not overindulge on mince pies!

Combine the plain flour and unsalted butter and using your fingertips, rub together to make a breadcrumb mix. Add the caster sugar and the egg and mix in well. Form a dough ball with the mixture and allow to rest in the fridge for 10 mins before rolling.

Grease and line two 12-hole shallow bun tins with the pastry for the base of the mince pies. Add a small spoon of mincemeat to the pasty bases.

Using some egg wash, seal the pastry tops onto the pies. Bake for 15 mins and allow to cool.

If you are going to freeze these, make sure you place greaseproof paper in between the layers so they do not get damaged.